The Pennsylvania School Boards Association (PSBA) is a nonprofit statewide association of public school boards. PSBA was founded in 1895 and has a rich history as the first school boards association established in the United States. Membership in PSBA is by school district or other eligible local education agencies such as intermediate units, vocational schools, or community colleges.

2020 marked 125 years of PSBA’s service and membership. The organization celebrated its longstanding history alongside the public education system of the Commonwealth of Pennsylvania. The year-long celebration included the announcement of numerous new programs and services for members, the production of a video and book commemorating 125 years of education history in the commonwealth, the creation of an archive collection to be housed at the PSBA offices in Mechanicsburg, and the launch of a special website. 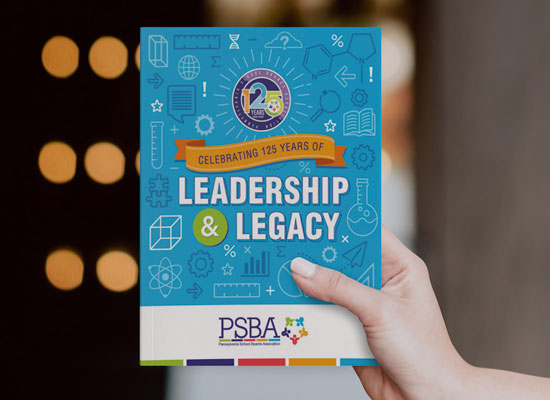 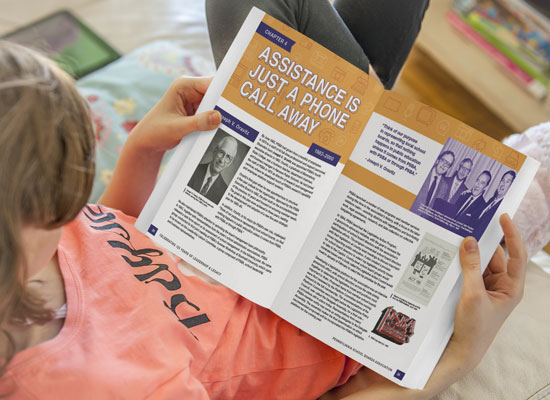 PSBA chose to partner with Graphcom to conceptualize, design, and produce the 125th anniversary commemorative book. The Graphcom and PSBA teams met virtually for a project kick-off and idea-filled “meeting of the minds.” During this collaboration, PSBA shared details of the organization’s history and significant events and images that were to be highlighted in the publication. Exchanged between each team were ideas of messaging, color schemes, and imagery.

With this knowledge, the Graphcom team began to brainstorm internally, and two design comps were presented to the PSBA team for careful consideration. After the direction was chosen, Graphcom designed the remainder of the book over the course of a few weeks.

The culmination of the year occurred in October 2020 with a special virtual celebration, at which time the 125th commemorative anniversary book was unveiled. Hard copies of the books were mailed to PSBA supporters and stakeholders in early 2021. 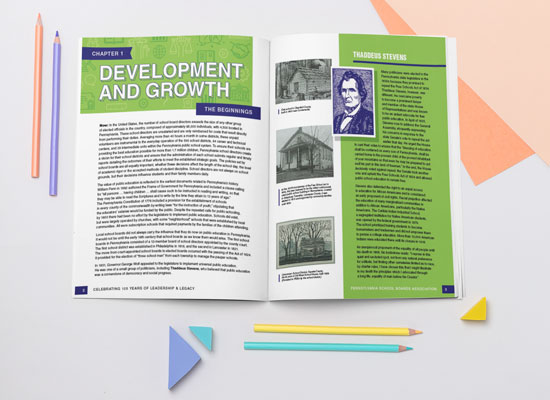 Graphcom designed and produced a stunning 5-chapter, 60-page book in both perfect-bound soft-cover and case-bound hard-cover versions. The bold color scheme compliments PSBA’s branded color palette and features stories and photos that take the reader on a historical journey of PSBA’s 125 years. The book is a true celebration of the organization’s progress, growth, and overarching support for Pennsylvania’s public education professionals.

PSBA will continue to ship the anniversary books to supporters, stakeholders, and members. In addition, Graphcom created a web-optimized PDF of the book that lives on PSBA’s site. Having access to a digital version provides all visitors to the PSBA site the opportunity to better understand the accomplishments and mission of the organization.

“Thank you to the Graphcom team for your good work on our publication!
Our CEO is very happy with it, and we’ve already received positive feedback from the recipients.”

Need Help with Your Printed Materials?

Whether you need help with just the printing or from concept to finished project, we can fill in all the gaps.