An affiliate of Carroll Hospital Center in Westminster, Md., Carroll Hospice offers compassionate hospice care to terminally ill patients and their families. Carroll Hospice was seeking a new marketing firm to write, design, print, and mail its annual appeal letters to raise funds during National Homecare & Hospice Month in November. These funds help other families cope successfully with the suffering, confusion, doubts, and fears that surround a loved one’s death.

The mailing was to be sent to two distinct groups:

Our challenge was to present information in a respectful, compassionate way, while also creating an impactful call to action that inspired donations. 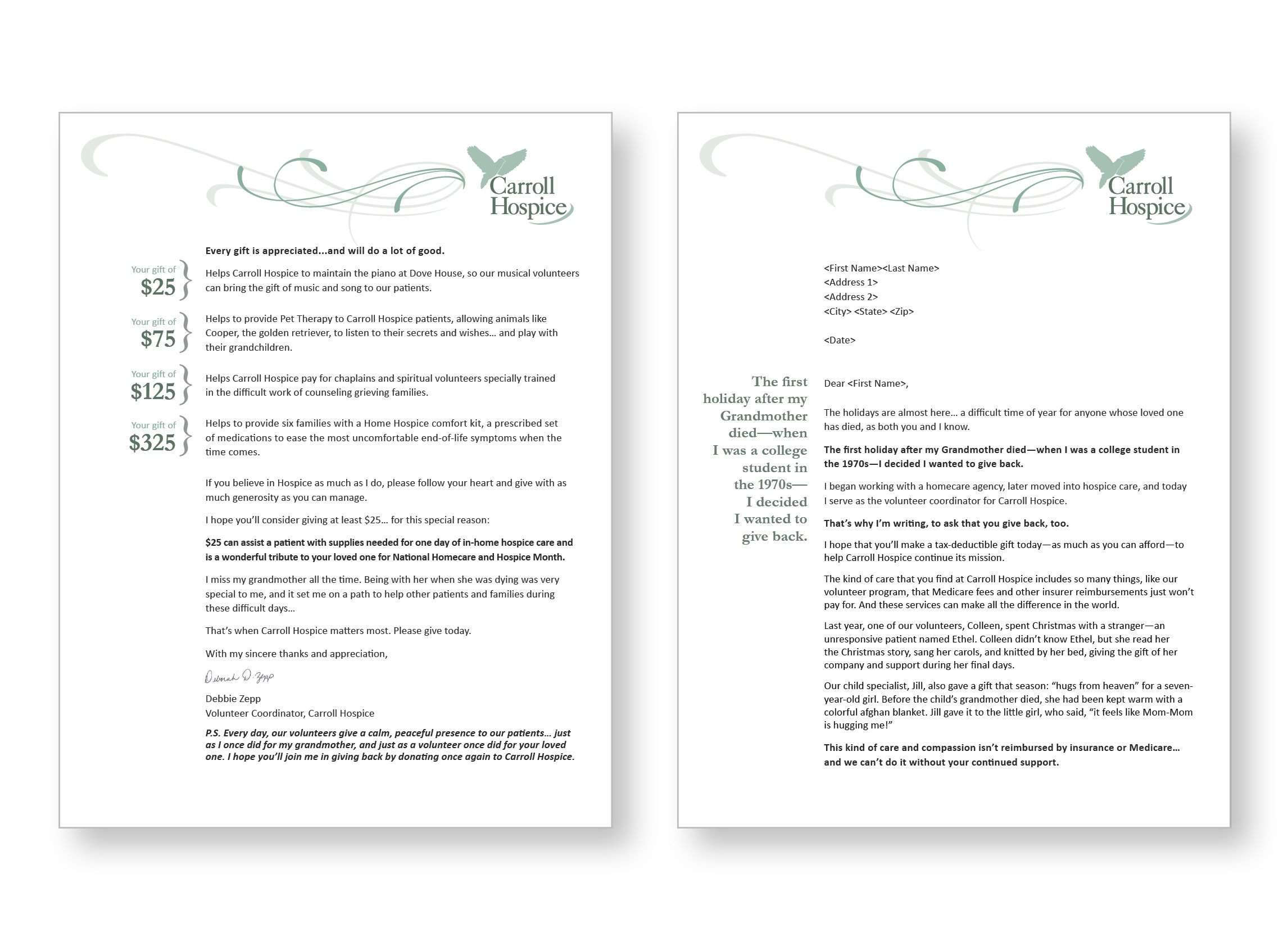 Because these letters would be sent to people who have donated before, as well as families who recently received hospice care and bereavement services, it was important to appeal to their emotions and their personal connections to hospice. First, we selected a thick, cream-colored paper to give the piece a formal, respectful look and feel. Our art team worked within the Carroll Hospice brand to create a design that simulated personalized stationery.

For content, we interviewed Volunteer Coordinator Debbie Zepp, who shared a heartfelt story of her friend Betty’s experience with hospice care, and how this inspired her to become a hospice volunteer coordinator. Debbie’s personal, compassionate stories captured how other volunteers made an impact on grieving families, as well as the scope of care and services offered at Carroll Hospice that are paid for by donations, including the volunteer program. Narrated from Debbie’s perspective, we wrote two appeal letters (which included a follow-up letter for those who didn’t respond to the first mailing), slightly modified for both recipient groups.

All appeal letters were marked with a code so we could track data such as recurring vs. new donors, the number of gifts received, and total gift amount. Because we knew which recipients donated the previous years and what amount, we used variable data in each letter to replace the base amount of money requested to match the total the individual previously donated (for example: “I hope you’ll consider giving at least $75…” when $75 is the amount they previously donated). of all recipients responded

dollars were earned for every dollar spent

“We worked with Graphcom for the first time in fall 2014 on a mailing with a very short timeline. They were professional, fast, and efficient while producing an amazing end product with a fresh design. To top it off, the results of our mailing were the best we’ve had in several years!”

Get Your Next Appeal Off the Ground

Graphcom can help you take your fundraising appeals to the next level.